It seems as though every controversy that emerged from the world of retail investing in 2021 had to invest app Robinhood connected in some way. From the controversial GameStop frenzy in January to ongoing battles with the SEC to clear the name of its payment-for-order-flow operating model, it’s been a difficult year. But the new year may well promise new opportunities for Robinhood, and a return to form could help to see the company’s ailing stock pick up once again.

Furthermore, a return to form is much needed for Robinhood, which has experienced a 47% decline in stock value since its July debut on the Nasdaq.

The figures paint an alarming picture for a stock that had plenty of promise when the news of its IPO broke out. So what’s gone wrong for the much-maligned HOOD?

“Robinhood’s strong decline is linked to the Q3 report, where the company’s revenue was below expectations and the company also expects a continued slowdown in revenue in Q4,” explained Maxim Manturov, head of investment research at Freedom Finance Europe. “In Q4, the company’s management has given a revenue forecast that will not exceed $325m against market expectations of $489.21m.”

“The revenue was very much affected by the decline in cryptocurrency transaction revenue ($233m in Q2 versus $51m in Q3). It is also worth noting that 111m shares were unlocked in November and there was pressure on growth stocks (lower IPO ETFs), which also continued the pressure on the company’s shares.”

So, what exactly has gone wrong for Robinhood, and why could 2022 hold more promise for a price recovery on Wall Street?

For HOOD, many things have gone wrong with the stock since its launch. However, it appears clear that the driving force behind the asset’s dwindling price is the rise and fall of meme-based cryptocurrency token, Dogecoin.

In Robinhood’s S-1 filing ahead of its IPO, the company warned that its business model was highly dependent on the performance of DOGE.

The Q2 surge in demand for Dogecoin led to huge revenue volumes for Robinhood. Crypto-based transaction revenue for the second quarter of 2021 totaled $233 million. For the same period in 2020, Robinhood’s revenue stood at just $5 million.

Whilst these figures are impressive, they show that HOOD was listed at the beginning of a downturn for Dogecoin, with the wider world of crypto failing to recapture the buoyancy that was felt across the landscape in early 2021. 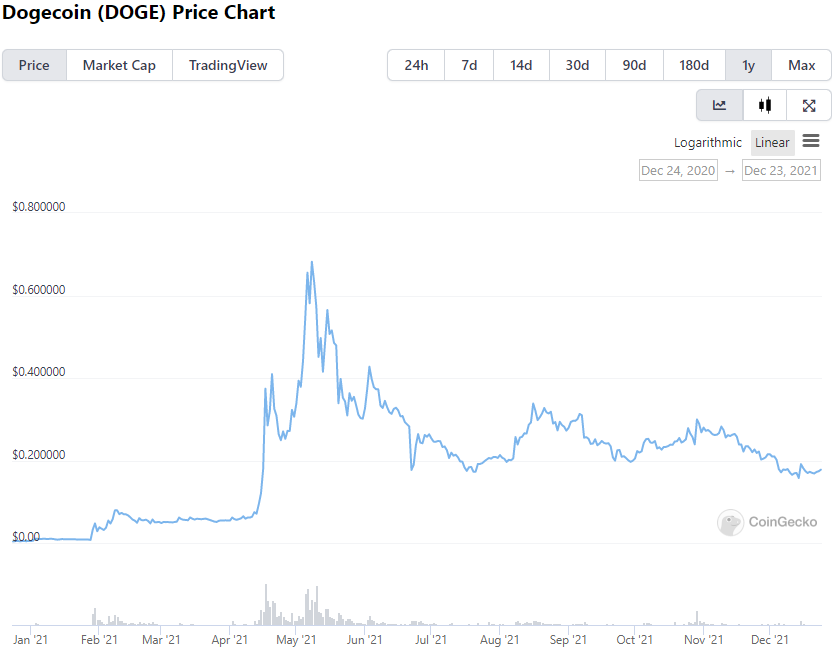 As we can see from Dogecoin’s price performance throughout the past 12-months, a heavy decline did take place following a peak in the early summer.

Although this points to a bearish outlook for Robinhood, the company is looking to double-down on its accommodation of crypto in 2022, with the rollout of a dedicated cryptocurrency wallet set to take place in the new year. Over one million sign-ups to the new feature have already been registered, and the move looks set to reignite investor interest in the platform’s range of cryptocurrencies.

Furthermore, one source has suggested that Robinhood will be listing Dogecoin’s dog-based meme token counterpart Shiba Inu in “March-April 2022” following the launch of the wallet. By doubling up on their meme token options, Robinhood is taking a gamble on the resurgence of interest in the dog tokens that dominated crypto sentiment throughout the first half of 2021.

SHIB’s growth across the past year has been mind-boggling. From the coin’s all-time low on November 28th, 2020, the coin has grown 66,182,639% – making it a meme investor’s dream, and, potentially, a sentiment-based asset to drive greater volume to Robinhood.

Of course, there are caveats. For instance, key rivals like Revolut have signaled its intent towards offering investment options in the US in the future – putting the European challenger bank in direct contention with Robinhood.

Robinhood’s development may also be hindered by its fractured reputation among its target market, who will take a long time to forget about the app’s limiting of their activity amidst the GameStop short squeeze of January 2021.

However, the company’s commitment to democratizing finance has seen Robinhood offer innovative new products to its users, like IPO access with no minimum balance required and the aforementioned cryptocurrency wallet that’s soon to touch down in 2022.

The rumored accommodation of Shiba Inu and a general expansion of crypto services on the platform will solidify Robinhood’s position as a market leader. If the cryptocurrency market could recapture the bull run that blew bearish sentiment away 12-months ago, it’s highly likely that HOOD will reap the benefits on Wall Street.

It’s a long road ahead for HOOD, but the steps being taken appear to be positive ones.

CBD: A ‘Miracle’ For Your Skincare Routine? EveryFace Inks Partnership With QVC