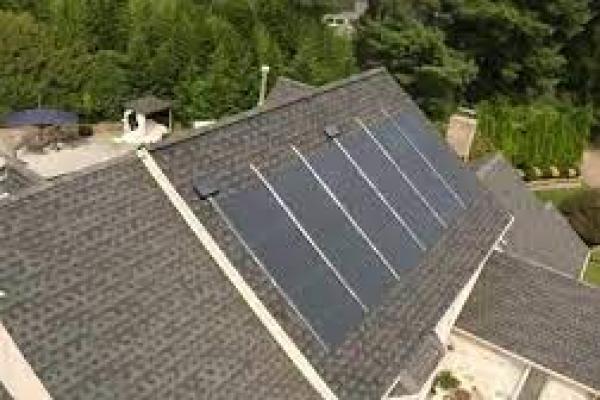 What Happened: GAF announced the release of its Timberline Solar roof system on Monday.

The company said the roof system is comprised of the “world’s first nailable solar shingle, the Timberline Solar Energy Shingle.”

“Through our national roofing network, world-class talent, and aggressive investment in research and development, the Standard family of companies will transform the solar industry,” said David Winter and David Millstone, co-CEOs of Standard Industries.

“No one has ever specifically tried to make a solar product that a roofer can install. And we’ve done it, and our product goes on with just a nail gun. It goes on twice as fast as typical solar,” said Martin DeBono, president of GAF Energy, according to a CNBC report.

Why It Matters: GAF Energy works in partnership with GAF, a largescale provider of roofing and waterproofing.
GAF Energy said in a statement that one in every four roofs in the United States is manufactured by GAF, its sister company.

GAF Energy shingles are reportedly 17 inches tall and 64 inches long, which is larger than Tesla’s offering, which means they don’t blend in as well.

On the other hand, larger shingles mean fewer parts to manufacture and a reduced need for wiring, which, according to GAF Energy, would lower costs while increasing reliability, reported CNBC.

GAF Energy’s DeBono said that the cost of Timberline Solar could be twice as much as normal asphalt shingles. No specific costs were reportedly given out by the executive, according to CNBC.

“Let’s say in many parts of the country, you have a fifteen thousand dollar cost for the roof. Getting a solar system, adding that would be another fifteen thousand,” DeBono said.

Last year, Tesla faced legal action from customers due to price increases of nearly 30% or more.

In October 2020, a customer sued the Elon Musk-led company over alleged “bait and switch” tactics in a solar panel deal.

More recently, Tesla has taken its solar roof initiative nationwide and has updated its solar roof to increase power and efficiency. Tesla’s roofs can be installed over an existing roof.