Stock market futures are edging higher in early morning trading this Tuesday. In general, the current strength in markets would be welcomed by investors after a volatile December. On top of that, there could also be anticipation for the slew of economic data points incoming this week. Particularly, investors could be looking towards a new set of manufacturing and labor market data later today. This would include the ISM Manufacturing Index alongside the latest job openings.

Commenting on the upwards movement in markets now is Baird market strategist Michael Antonelli. Antonelli says, “When I think about the market and the economy right now, I think about momentum.” He notes that momentum is among the “most durable factors” to consider in the stock market today. In addition, Antonelli continues, “If you looked at new all-time highs last year, there were actually more new all-time highs than in the entire ’70s and 2000s combined, those two decades — we’ve got a lot going for us right now.” As of 6:15 a.m. ET, the Dow, S&P 500, and Nasdaq futures are trading higher by 0.40%, 0.43%, and 0.43% respectively.

Apple (NASDAQ: AAPL) seems to be among the tech titans making waves in the stock market today. Overall, this would be thanks to the company officially hitting a market capitalization (cap) of $3 trillion yesterday. To elaborate, AAPL stock hit an intraday high of 182.88 during yesterday’s trading session. As a result, the company’s market cap briefly topped the $3 trillion mark. For those who are wondering, what’s the big deal here, Apple is the first company to achieve this. Despite the company’s shares steadying back down to $182.01 a piece by Monday’s closing bell, this is admirable.

For the most part, this feat would illustrate the immense growth that Apple has and continues to experience. To put things into perspective, this comes less than two years after the company celebrated hitting a market cap of $2 trillion. Given the heavily consumer-focused world we live in now, most would argue that the company has plenty of room to run moving forward. From its industry-leading iPhones and iMacs to its portfolio of related services Apple continues to dominate consumer markets worldwide. On top of that, the company is actively working to further refine its operations and improve its margins. This is apparent as it continues to impress on the hardware front by making its own cutting-edge processors.

Furthermore, there are also growing mentions of Apple’s plans to venture into the autonomous vehicle and metaverse-related fields as well. However you look at it, the company is actively working to retain its leadership in consumer-based markets. Whether it is through expanding its offerings or improving existing ones, this is apparent. As such, even as it trades near-record levels, I could see investors eyeing AAPL stock now. 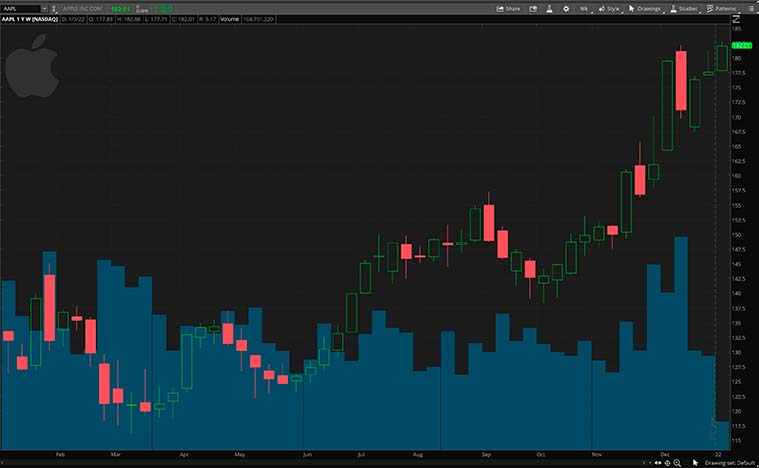 Goldman Sachs Sees Major Growth Ahead For Semiconductor Industry In 2022

In other tech-related news, some of the top semiconductor stocks are coming into focus in the stock market this week. Namely, this is thanks to a rosy update on the industry as a whole from investment banking firm Goldman Sachs (NYSE: GS). Among the two major names mentioned in the report are Advanced Micro Devices (NASDAQ: AMD) and Marvell Technology (NASDAQ: MRVL). For starters, Goldman Sachs analyst Toshiya Hari now lists AMD as a top pick for the firm. According to Hari, the firm has “significant upside” from Wall Street’s estimates.

He argues that AMD still has space to grow in terms of market share and gross margins. All of which would serve to support earnings growth in the long run. As a result, AMD stock is now on Goldman’s Conviction Buy list with a price target of $170 a share. Secondly, Hari also brings attention to Marvell in his latest coverage. The analyst notes that Marvell has and continues to benefit from “strong organic growth” alongside notable M&A activity. Additionally, the company is also looking to accommodate upcoming cloud, 5G infrastructure, and automotive markets in the long term. Now, Goldman Sachs currently has a $98 price target on MRVL stock.

Adding to all that, here are several other names with “Buy” ratings over at Goldman Sachs. They are Teradyne (NASDAQ: TER), Impinj (NASDAQ: PI), Micron (NASDAQ: MU), On Semiconductor (NASDAQ: ON), and Broadcom (NASDAQ: AVGO) among others. As such, these semiconductor stocks could be on investors’ radar now.

On the pandemic front, more countries across the globe are turning towards treatments as Covid cases surge. Accordingly, Belgium is the latest of said countries. This is evident as news broke of Belgium buying 10,000 courses each of Pfizer’s (NYSE: PFE) and Merck’s (NYSE: MRK) antiviral pills. All in all, the current move comes as no surprise as the world continues to fight off the current wave of Covid infections. While the increasingly dominant Omicron variant may produce less severe symptoms, these antivirals serve crucial roles nonetheless.

Regarding the current Belgium agreement, the country’s health minister had already revealed that it had been in talks with Merck. Also, all this is despite both companies’ treatments not being authorized by European Union drug regulators. This would go to show the severity that comes with the exponential increase in new infections globally. Because of this, I could see coronavirus treatment stocks gaining traction across the board.

Lockheed Martin (NYSE: LMT) appears to be soaring towards newer heights on the operational front now. After all, the company did just beat its 2021 target for F-35 fighter jet deliveries. According to the leading aerospace defense firm, its 2021 F-35 deliveries are at a whopping 142 jets. This is above its initial goal of 139. The company cites growing efforts from its suppliers and workforce alongside “efficiencies of digital engineering” for this win.

Overall, this comes as more countries are turning to Lockheed Martin for their fighter jet needs. Just last year, Switzerland and Finland were the latest to choose the F-35 for their new jet programs. In particular, Finland is ordering 64 of said jets, as of December 2021. All of which are now part of a $9.4 billion deal. Not to mention, the company is also working towards delivering on a 156 aircraft order for the U.S. starting in 2023. With Lockheed Martin seemingly firing on all cylinders now, LMT stock could be worth watching for some. 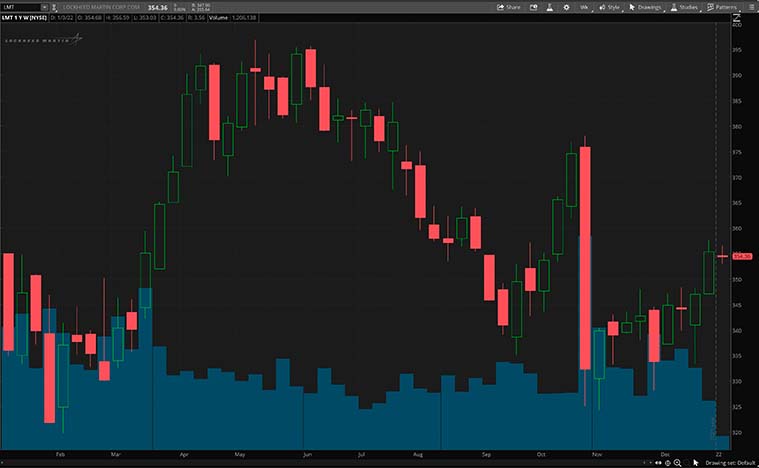