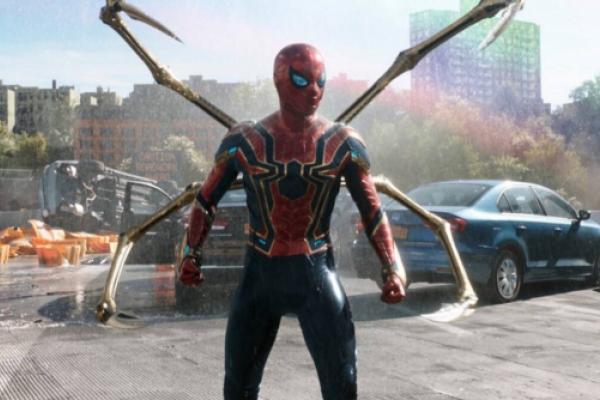 “Spider-Man: No Way Out” maintained its domination of the U.S. box office for a third consecutive weekend, bringing in $52.7 million from 4,206 screens.

What Happened: The Sony Pictures (NYSE: SONY) release has grossed $610 million from the domestic box office since its premiere, making it the 10th highest grossing U.S. film release in cinema history.

What Happens Next: The first weekend of January is traditionally a sleepy period for new film releases, and this coming weekend is no exception. Only one new film is going into nationwide release: the spy thriller “The 355” from Universal Pictures starring Jessica Chastain, Lupita Nyong’o and Penélope Cruz. “The 355” has been on the shelf for a year – it was initially supposed to go into release on Jan. 15, 2021, but was put on hold due to the COVID-19 crisis and is only now getting a screen date.

Other new films playing in limited release include two titles from Saban Films: the horror film “The Legend of La Llorona” starring Danny Trejo and the action-adventure “The Commando” starring Mickey Rourke and Michael Jai White. Also in limited release is the Brazilian science-fiction film “King Car” from Dark Star Pictures and Asghar Farhadi’s “A Hero,” the Iranian entry for this year’s Academy Award for Best International Feature Film – the Amazon Studios unit of Amazon.com (NASDAQ: AMZN) is handling the U.S. release.

Also Happening: For many people, the moviegoing experience isn’t just about the big screen – popcorn, soda and other concession stand snacks offers a junk food high that adds to the fun.

Alas, French movie lovers will have to go without food or drink if they want to enjoy the latest cinematic offerings. According to a Deadline report, the French government is banning the consumption of food and drink in movie theaters for three weeks beginning on Jan. 3 as a means of mitigating the rising number of omicron variant cases.

By the way, did you ever wonder why popcorn is a staple at movie theaters? For the answer, we recommend that you watch this jolly educational video:

Meta Platforms To Report Earnings After Closing Bell, Here’s A Look At Recent Price Target Changes By The Most Accurate Analysts

Is Inflammation Behind Your Chronic Conditions?