Polymarket will pay a $1.4 million fine and wind down some prediction markets after a CFTC investigation found it was offering illicit options contracts in the U.S. This is very likely just a beginning for DeFi projects facing the regulatory gauntlet.

You’re reading State of Crypto, a CoinDesk newsletter looking at the intersection of cryptocurrency and government. Click here to sign up for future editions.

The Commodity Futures Trading Commission (CFTC) filed an enforcement action against Polymarket, alleging it violated federal commodities laws and regulations by offering prediction markets in the U.S. without registering with the agency. Polymarket cooperated closely with the investigation, leading to a reduced penalty. I’m guessing this cooperation also means the investigation wrapped up quickly where other investigations might not have.

2022 is barely three days old, and it’s already taking off. To date, a lot of how the industry interprets regulations has been through agency enforcement actions – in other words, agencies explain which laws are being broken by XYZ project. Polymarket’s enforcement action is likely a preview of some of what we can expect to see this year.

The first enforcement action of 2022 came against Polymarket, a prediction market that longtime readers of this newsletter’s predecessor might remember from when I tracked its 2020 election market.

The CFTC said Polymarket’s, uh, markets are binary options contracts, which can only be offered by Designated Contracts Markets (DCMs) and Swap Execution Facilities (SEFs) in the U.S. Polymarket has not sought either designation, meaning its markets were in violation of federal law and the CFTC’s regulations.

Under the terms of the enforcement action, Polymarket will pay a $1.4 million fine, wind down markets not in compliance and allow users to recoup their funds.

In a statement, a Polymarket spokesperson said that three markets currently set to resolve after Jan. 14 would be wound down. A quick search of Polymarket’s site indicates that there are six markets currently set to resolve past Jan. 14 – four on the U.S.’ seven-day COVID-19 stats, one on U.S. President Joe Biden’s approval rating and one on whether NFL quarterback-turned-minor-league-baseball-player-turned-tight-end Tim Tebow will score a touchdown by the end of the season.

Most of these will expire on Jan. 15. The Tebow one is currently set to expire a month later. That being said, my understanding is that after Polymarket winds down its open markets, there will be no open markets after Jan. 15.

“We appreciate that in today’s resolution, the CFTC recognizes our substantial cooperation and efforts to date to engage with them transparently on these topics and to educate them on the architecture and foundational DeFi primitives underlying Polymarket,” the company said in a statement.

There are a few takeaways here. First, this is probably not great news for other crypto/decentralized finance (DeFi) prediction markets that are accessible in the U.S. Back in 2020, I followed FTX, Augur and Everipedia’s PrediQt markets. FTX geofences its U.S. users and as far as I can tell, Americans can’t access the prediction markets.

I couldn’t tell if PrediQt and Augur have similar geofences after a quick search. I’ll be watching for any further actions related to those two platforms.

Yesterday’s action wasn’t a surprise. We’ve known about an investigation into Polymarket – that the company appears to have cooperated with – since at least October, and former CFTC Commissioner Dan Berkovitz straight up said that DeFi platforms offering derivatives products would run afoul of the agency’s remit.

While this first action was focused on a prediction market, I have to imagine this is the sort of precedent every DeFi project operating in the U.S. might want to pay attention to, particularly if they offer trading services for anything that could be perceived as a derivative product.

Also, as noted by attorney Collins Belton, the actual order published by the CFTC appears to acknowledge decentralization (or a lack thereof) as a factor in its decision to bring an action against Polymarket. In other words, a more fully decentralized prediction market may have an easier time of it.

The CFTC also appears to note a distinction in automated market makers (AMMs) being algorithmically driven, implying that not all AMMs may fall under the CFTC’s registration requirements, according to Belton.

“DeFi presents unique challenges to both builders and regulators, and Polymarket remains committed to working with regulators to ensure that the rules currently governing digital assets and DeFi are sufficiently clear, allow for innovation in the United States, and protect individuals’ interests and the integrity of U.S. markets,” Polymarket  said in its statement. “We remain optimistic and look forward to a productive relationship with the CFTC that carves out a compliant path for DeFi products in the future.”

Changing of the guard 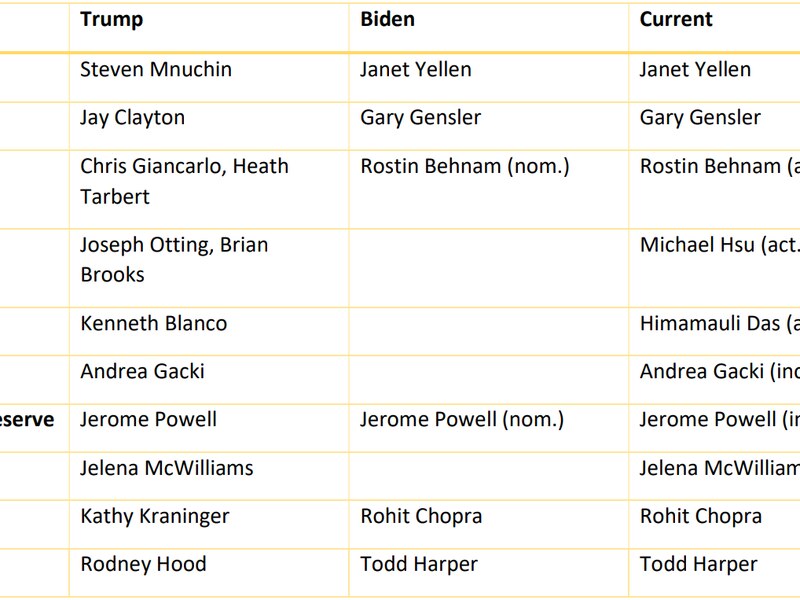 Jelena McWilliams, the Chair of the Federal Deposit Insurance Corporation, said she would resign from the federal bank regulator in a surprise New Year’s Eve announcement. This comes after what’s been described as a power struggle between McWilliams, a GOP-nominated holdover from the Donald Trump administration, and Democrats, including recently-confirmed CFPB Director Rohit Chopra and Acting Comptroller Michael Hsu.

If you’ve got thoughts or questions on what I should discuss next week or any other feedback you’d like to share, feel free to email me at [email protected] or find me on Twitter @nikhileshde.

You can also join the group conversation on Telegram.