A new year, however, some trends seen at the back of last year remain. Equity markets have been off to a flyer with fresh record highs in the US, in which the tech giant, Apple, became the first company to reach the $3tln market cap milestone.

Across the FX space, Japanese Yen selling showed little signs of abating, having come off the back from its worst performance against the USD since 2014. USD/JPY is now at its highest level since January 2017 after tripping stops through 115.50 overnight amid the surge higher in US yields (US 10yr rose 11bps in yesterday’s session). That said, while higher yields and equities have weighed on JPY, the view of market participants favouring those currencies where central banks are looking to raise rates over low yielders are also at work with cross-yen notably firmer.

Japanese Yen Performance vs US Dollar 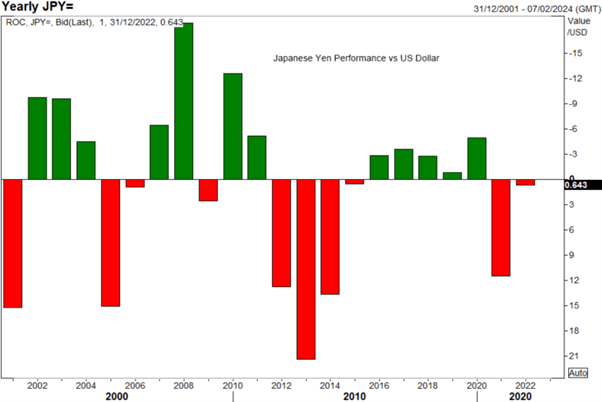 Taking a look at USD/JPY on the tech front, the daily RSI is back in overbought territory. Although, given the occurrence of this over the past year, this would unlikely be sufficient enough to indicate a potential pullback in the pair (91.5 percentile over 1yr lookback).

USD/JPY Overbought, But Far From the Extremes 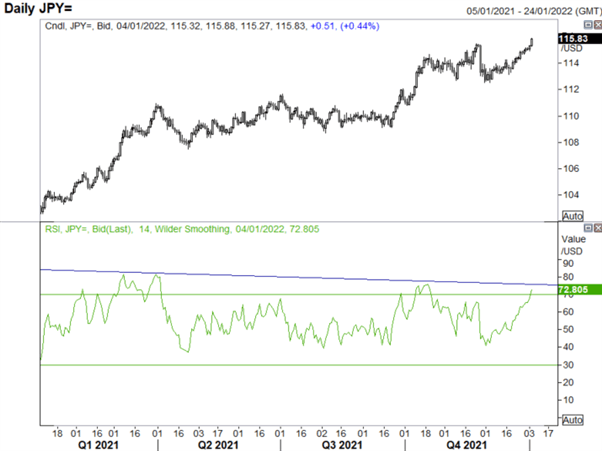 As such, despite the bearish RSI divergence, the RSI is far from extreme conditions, while I would need to see US yields soften in order to increase my conviction in expecting a dip in USD/JPY and instead would pay closer attention to the weekly RSI. A reminder that USD/JPY is among the closest correlated FX pairs to US yields and therefore it pays to keep a close eye on US fixed income.