As the calendar turns to 2022, the slate is wiped clean of the buoyant enthusiasm that carried risk markets higher through the second half of 2020 and all of 2021. Aggressive fiscal stimulus is now in the rearview mirror, while central banks globally have begun to roll back asset purchases – and in some cases – aggressively raise interest rates to combat persistently high inflation.

The emergence of the Omicron variant may ultimately portend the end of the pandemic as we know it, but the threat of overwhelmed healthcare systems, even if fatalities remain low, could bring about more government restrictions that weigh on economic activity. At least for 1Q’22, these factors could see a further cooling of risk appetite before calmer – and more bullish – heads prevail later in the year. 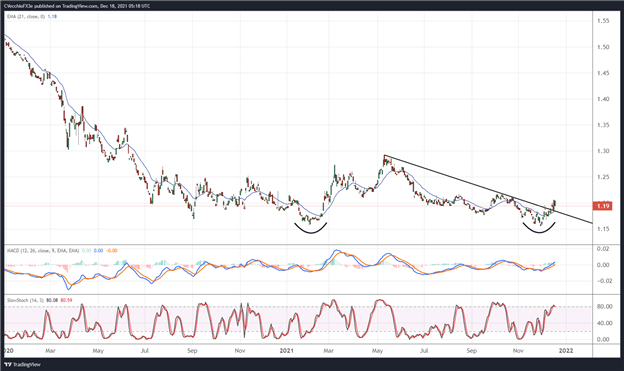 When the 4Q’21 top opportunities were written, the US S&P 500 was trading below 4450, and a year-end target of 4800 was outlined. Stocks nearly achieved that goal, hitting a high of 4731 by mid-December. But there has been a notable shift in the internals of the market: the high flying, high growth, low (or no) revenue tech names have slumped significantly.

And thus in lies the rub for early-2022: growth stocks may continue to underperform their value counterparts. The S&P 500/Nasdaq 100 ratio broke its downtrend in place from May through December by mid-December 2021, with a potential double bottom forming against the 1Q’21 and 4Q’21 lows. With the breakout higher just having transpired in the past few weeks, we may be in the early stages of a rotation in stocks from growth to value. The long S&P 500/short Nasdaq 100 trade is eyed until the ratio hits 1.29; it is currently 1.19. 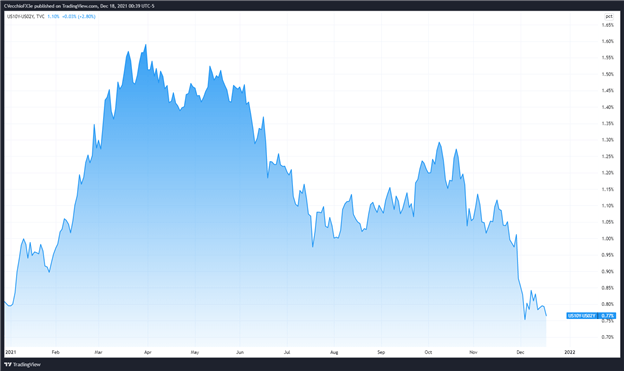 One of the facets of the Federal Reserve tightening policy is the impact on short-end rates and long-end bond yields. While the short-end of the US Treasury yield curve tends to see higher rates as the Fed pulls back stimulus, the long-end of the yield curve tends to come down as growth and inflation expectations – inherently embedded in the long-end – come down as reduced stimulus reduces economic potential. A further flattening of the US yield curve is expected in the 2s10s spread, which will inevitably stir speculation of recession fears in financial media in the not-too-distant future. 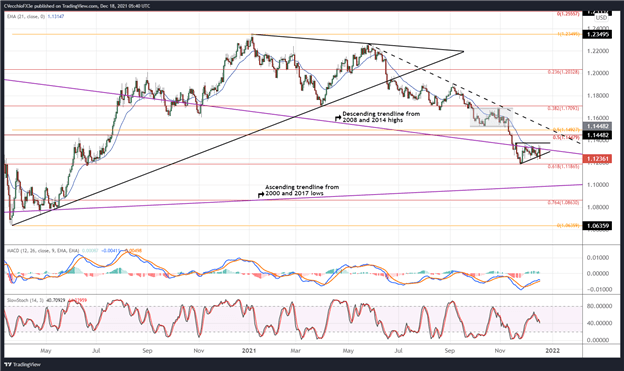 And yet, even if growth concerns spread and the US Treasury yield curve flattens, the US Dollar may continue to perform well. These two themes are indeed influenced by Fed tightening, but the Fed tightening may be viewed from a different perspective: in comparison to what other central banks are doing. To this end, the juxtaposition between the Federal Reserve and the European Central Bank will only grow over the coming months, and historically speaking, the spread between US and Eurozone inflation rates portends a further weakening of the EUR/USD exchange rate. A drop below 1.1000 should be eyed during 1Q’22.