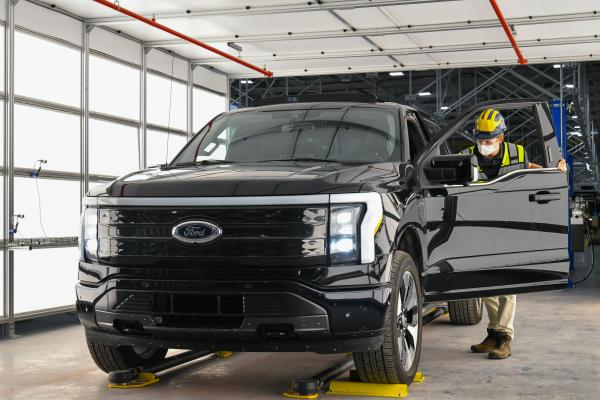 Ford Motor Co (NYSE: F) said on Tuesday it plans to nearly double production of its hotly-anticipated F-150 Lightning all-electric truck to meet soaring demand, and the automaker is opening the first wave of order banks this Thursday.

What Happened: The Dearborn, Michigan-based automaker said it is now planning to nearly double the production capacity of the all-electric F-150 Lightning pickup to 150,000 vehicles per year at the Rouge Electric Vehicle Center.

The legacy automaker’s new target is to meet “soaring customer demand” and comes amid the company’s push to switch entirely to electric vehicles in the coming years.

“The reality is clear: people are ready for an all-electric F-150, and Ford is pulling out all the stops to scale our operations and increase production capacity,” said Kumar Galhotra, Ford’s president of Americas & International Markets Group.

The automaker has nearly 200,000 reservations as of Tuesday, excluding fleet reservations.

Ford said it is implementing a wave-by-wave reservation and inviting customers in batches over email to convert their F-150 Lightning reservations to final orders. The company added that additional reservation holders would be invited in phases to placing their orders over the next few months.

F-150 Lightning’s Production Status: The automaker said it is on track to begin customer deliveries for the F-150 Lightning this spring. The electric pickup has entered the final pre-build phase before accelerating into mass production, and the pre-production level trucks will be used for testing in real-world conditions to accumulate one million miles collectively.

Why It Matters: Ford is expecting the popularity of its most-sold and the most-profitable full-size pickup truck F-150 to trickle down to the electric variant as well. The F-150 Lightning will go on sale at a ticket price of $39,974 and up for the base model and a range of 230 miles for the standard range.

Price Action: Ford stock is trading 0.83% higher at $21.95 a share premarket on the last check Tuesday.

Kitayama Leads Pebble Beach as the Worst of the Wind Looms