Dogecoin (CRYPTO: DOGE) enthusiasts who hoped to go interplanetary one day won’t be able to spend or trade the cryptocurrency on Mars due to synchronization issues, according to Tesla, Inc (NASDAQ:TSLA) CEO Elon Musk.

The cryptocurrency gained a lot of new utility here on Earth in 2021, however, and if Dogecoin continues to be adopted as payment for goods and services in the year ahead, its price could be bolstered as a result.

Dogecoin is currently bogged down by the price of apex cryptocurrency Bitcoin (CRYPTO: BTC), which Dogecoin tends to trade in tandem with. On Monday, Bitcoin was trading down almost 2% lower while Dogecoin followed, losing almost 3% of its value by midafternoon.

Ballet Crypto CEO Bobby Lee took to Twitter on Sunday to propose that the end-of-year “Santa Claus rally” in the cryptocurrency sector was negated due to an impending “last hammer” drop in China. Major exchanges had until December to deregister their Chinese clients, which has so far been delayed and could lead to a forced withdrawal of coins and tokens from trading platforms.

China has banned Bitcoin and other cryptocurrencies to some degree a number of times since 2013, cracking down on miners, traders and financial institutions. Although the Chinese government has so far been unable to completely wipe out exchange activity within its borders. If China does succeed, however, 2022 could be another tumultuous year in the sector.

For now, at least, Dogecoin and other crypto should continue to adhere to their chart patterns as algorithms and bots remain active in the sector just as they are in the stock market.

See Also: If You Invested $1,000 In Bitcoin, Dogecoin And Ethereum At The Start Of 2021, Here’s How Much You’d Have Today

The Dogecoin Chart: On Monday, Dogecoin was trying to hold above the lower ascending trendline of a rising channel pattern. The rising channel, when paired with the downward pole that was formed between Dec. 27 and Dec. 29, may have settled Dogecoin into a bear flag pattern on the daily chart.

If the bear flag is recognized, the measured move of the pattern is about 13%, which indicates Dogecoin could retrace further toward the 15-cent level. If Dogecoin breaks down from the rising channel (or flag), traders will want to watch for increasing bearish volume to confirm the pattern was recognized.

On Sunday, Dogecoin may have printed a lower high, which could indicate a downtrend is about to take place. For the trend to be confirmed, Dogecoin will need to drop below the most recent lower high that was printed on Dec. 30 at $0.165.

Want direct analysis? Find me in the BZ Pro lounge! Click here for a free trial. 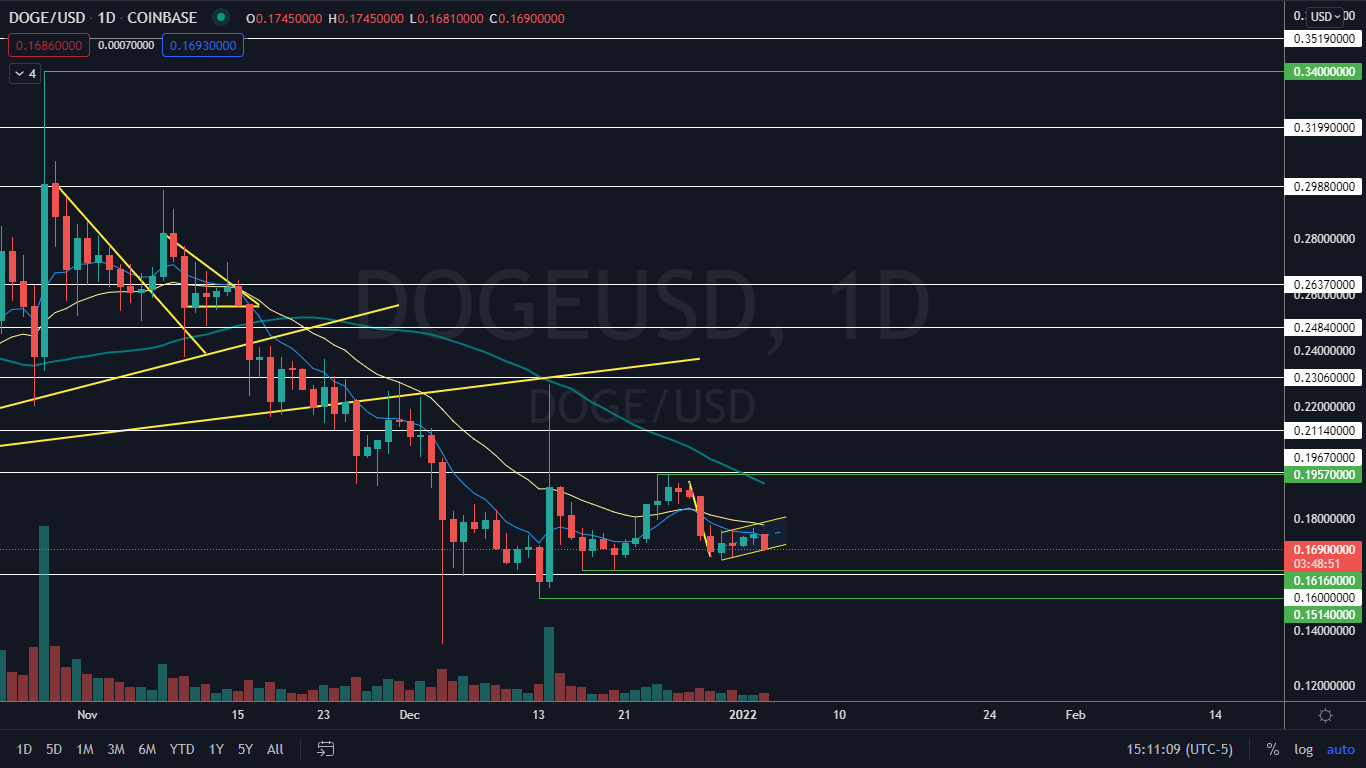