Bitcoin (CRYPTO: BTC) traded nearly 1.8% lower on the day it celebrated its 13th birthday as the global cryptocurrency market cap rose 0.2% to $2.2 trillion.

What Happened: BTC, which was first mined on Jan. 3 by its pseudonymous creator Satoshi Nakamoto, has fallen 8.1% for the week.

The top three gainers over 24 hours were BORA (BORA), yearn.finance (YFI), and Ankr (ANKR), according to CoinMarketCap data.

Why It Matters: On Monday, Block Inc (NYSE:SQ) CEO Jack Dorsey tweeted an image of the genesis block to mark Bitcoin’s birthday.

Since 2022 began, BTC has fallen 2.9% as December’s bearishness spilled over into the new year.

“Although 2021 ended on a gloomy note, Bitcoin and Ethereum closed the year up 57% and 403%, far surpassing returns for traditional financial assets,” noted Kaiko Research, in an emailed note.

Sharing a chart of a second-by-second buy vs. sell volume of transactions above 5 BTC, the research firm said a cluster of buy and sell orders were executed immediately before options expiry on Friday. While on Jan. 1 a large uptick was seen in sell orders. 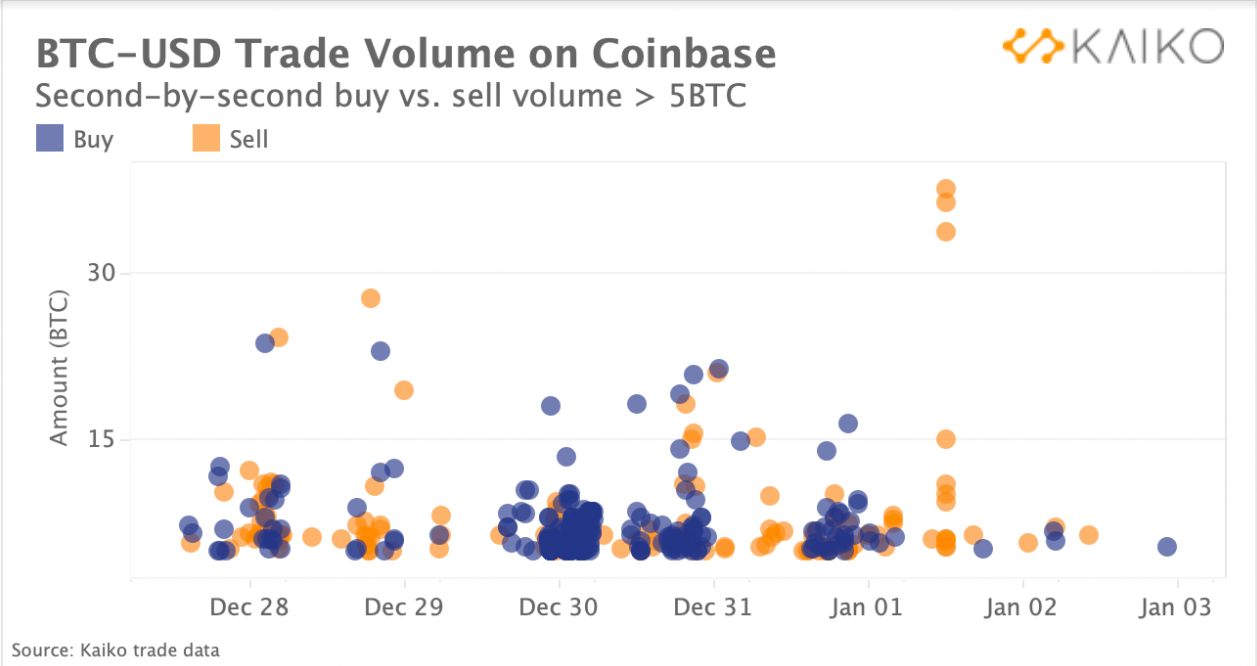 “It seems likely that a whale executed a large buy order on Coinbase causing a spike in market share, and in the days that followed whales were mostly sellers,” wrote Kaiko Research.

The downbeat sentiment in the cryptocurrency market was reflected in Alternative’s “Crypto Fear & Greed Index” which pointed towards “Extreme Fear” at press time.

However, the downtrend is short-term as BTC has broken out of the down-trending line dating back to the all-time high and has retested support at that line, according to a note by GlobalBlock analyst Marcus Sotiriou.

Read Next: 13 Fun Facts You May Not Know About Bitcoin On The Cryptocurrency’s 13th Birthday