Check Out These  Electric Vehicle Stocks In The Stock Market Today

Electric vehicle (EV) stocks have been a hot topic among investors of the stock market in recent years. Many believe the automotive industry will be going electric sooner rather than later. Even government bodies around the globe have been encouraging the transition to EVs by providing various forms of subsidies. And assuming you strongly believe in the growth trajectory of this space, it wouldn’t hurt to put up a list of top electric vehicle stocks to buy right now.

While Tesla (NASDAQ: TSLA) may have the most attention in the industry, we have to admit that the EV king has been consistent in terms of their EV deliveries. That is despite chip shortages that caused some automakers to cut production goals. Tesla has ambitious plans to grow how many vehicles it can produce. And its ability to expand its capacity will take place once its new factories come online.

On the flip side, rival Nio (NYSE: NIO) may be in a much earlier phase of its journey, but it has major plans for 2022. The Chinese rival recently announced its latest ET5 that it hopes will challenge the Tesla Model 3. Not only has it managed to make a place for itself in the domestic Chinese market, Nio started deliveries of the SUV model in Norway in September. And for 2022, the company plans to penetrate five more European markets. Although the stock prices of both Nio and Tesla haven’t exactly been moving in the same direction, the businesses have. Therefore, an investment in this space is likely to be attractive over the coming decade. Given all this, do you have these EV stocks on your watchlist right now?

Lucid Group is a premium EV company. Its first car, the Lucid Air, is a state-of-the-art luxury sedan underpinned by race-proven technology. For those unfamiliar, Lucid Air was named the 2022 MotorTrend Car of the Year. With its sleek design and technology, it’s not surprising to see it has a backlog of 17,000 vehicles as of November 2021. This would imply a revenue backlog of $1.3 billion. With LCID stock taking a breather over the past month, investors may be looking at an attractive entry opportunity once again.

Additionally, the company is pursuing the second phase of manufacturing expansion, which will boost its annual deliveries capacity to 90,000 vehicles. Upon its successful expansion to Canada and EMEA, the company also has plans to enter China in the following year. In case you have missed it, the company announced that it has been added to the Nasdaq-100 Index on December 20, 2021. That is a recognition of the company’s progress in establishing itself in the red-hot EV market. For these reasons, would LCID stock make your list of top EV stocks to buy right now? 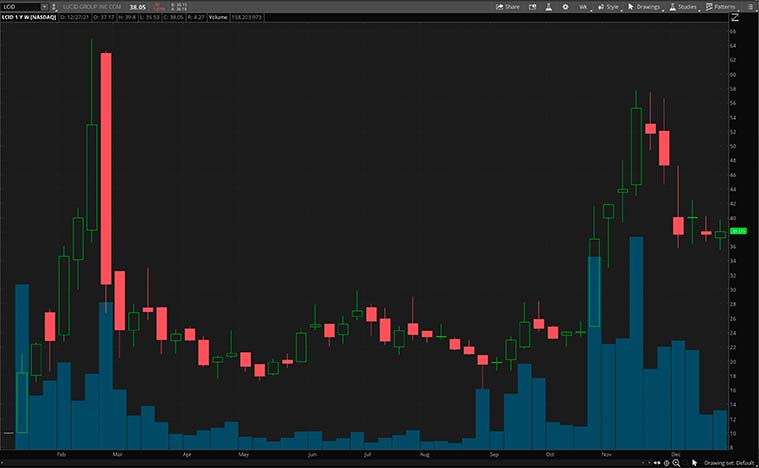 Chinese EV manufacturer XPeng is often called the “Tesla of China”. The company has just unveiled its rival to Tesla’s Model Y in November. Called the G9, the SUV is expected to be available for purchase in the second half of 2022. The G9 will be the company’s first model to be designed according to international safety and environmental protection standards. This is a move that is in line with XPeng’s international ambition. Going forward, the company aims to deliver half its output to countries outside China. For now, it already has a foot in Norway. In 2022, XPeng plans to start exporting cars to Denmark, Sweden and the Netherlands.

The company’s latest delivery figures in November were very impressive. In detail, XPeng delivered 15,613 vehicles for that month, representing a 270% increase year-over-year. This is testament to the company’s strong execution in light of various challenges in the global supply chain. Furthermore, XPeng has been expanding its supercharging network across China. It now has 550 branded supercharging stations in the country. Considering all these, would you be watching XPEV stock? 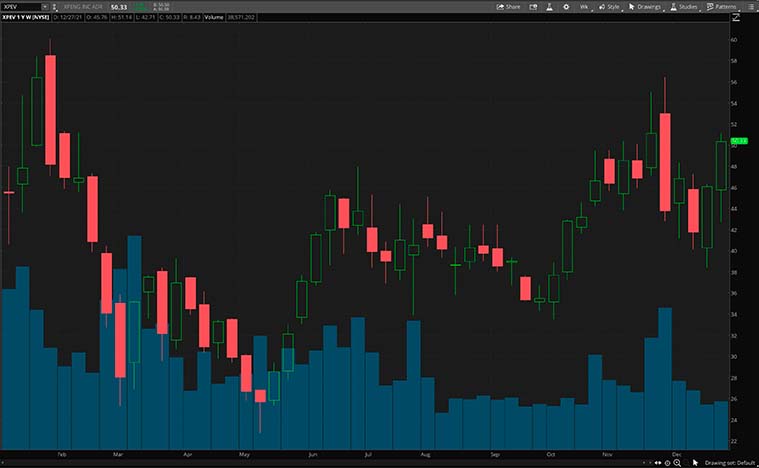 Rivian Automotive is touted as one of the up-and-coming rivals to Tesla. Unlike Tesla however, Rivian has its focus exclusively on electric sport utility vehicles (SUVs) and pickup trucks for now. After surging to highs of $180 a share, RIVN stock currently trades at a more reasonable valuation. And that could be attractive for investors looking for some exposure into this niche of the EV market. The company also said that it will deliver its R1T electric pickup trucks and R1S electric SUVs in early-2022.

It’s also worth mentioning that Rivian EDV van has an order backlog of 100,000 vehicles from its backer, Amazon (NASDAQ: AMZN). Apart from its Amazon orders and public orders for its two upcoming models, Rivian also has big plans. The EV carmaker reportedly plans to invest in building a battery factory in the U.S. It may also open a plant in Europe. With all these in mind, would you consider investing in RIVN stock in 2022? 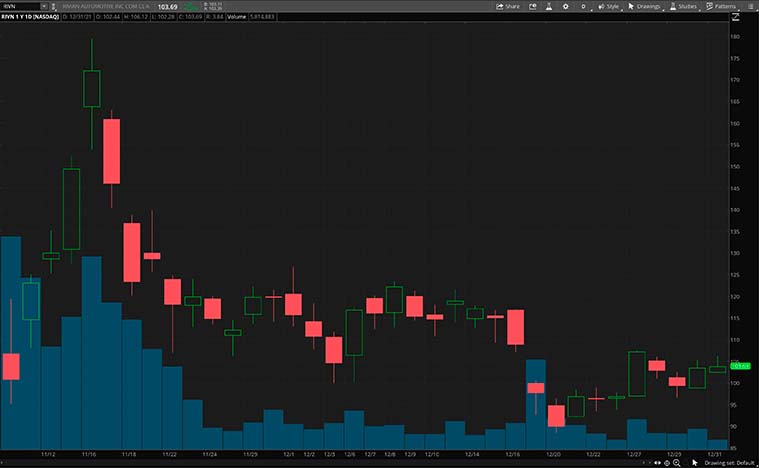 There’s no question that Ford has had quite a year as its stock has more than doubled in 2021. The stock has been on a tear since Jim Farley became the CEO 14 months ago and accelerated Ford’s push into the EV scene. Its market cap was even briefly higher than its chief rival, General Motors (NYSE: GM) earlier this week. With the Mustang Mach-E, F-150 Lightning and E-Transit vehicles in the pipeline, Ford is in a good position to benefit from the increasing adoption of EVs.

The company has made huge strides in the EV space this year, announcing that it expects 40% of all Ford global vehicle volume to be all-electric by 2030. Furthermore, it also raised planned electrification spending to $30+ billion by 2025, which will also include the development of its IonBoost batteries. THe company also estimated that it is likely to increase its EV production to 600,000 vehicles by 2023. This will make the company the second-largest U.S. producer of EVs. Thus, would you buy F stock? 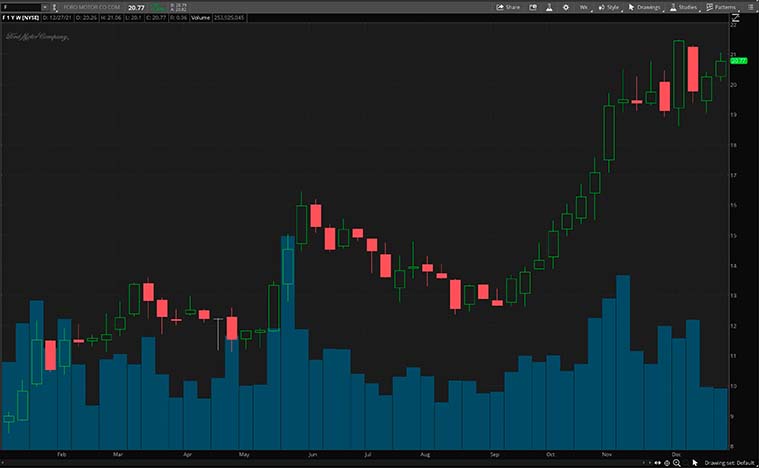 Last but not least, we have Fisker.The company has an asset-light, direct-to-consumer operating model that boasts a rapid path to production and profitability. With the company set to produce its Fisker Ocean in Q4 2022, it’s natural that FSR stock remains in the limelight. The vehicle has already received 62,500 indications of interest.

With marketing campaigns initiated in the U.S. and Europe, Fisker Ocean could see a healthy launch. Recently, Fisker announced a partnership with Bridgestone to provide total after-sales services for Fisker customers in France and Germany. This came after Fisker selected Bridgestone as exclusive tyre partner for its upcoming Ocean all-electric SUV. With crucial partnerships like this, many investors are hopeful of Fisker’s potential. The question is, would you bet your money on FSR stock now? 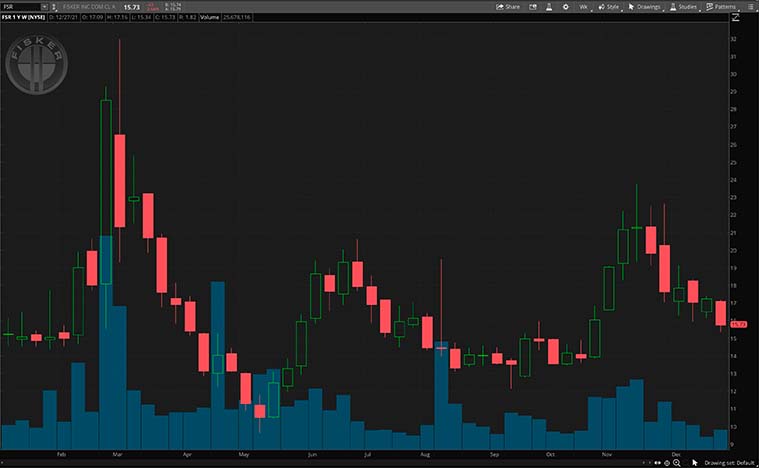 Harley-Davidson Inc. Stock, Is It Time To Buy?