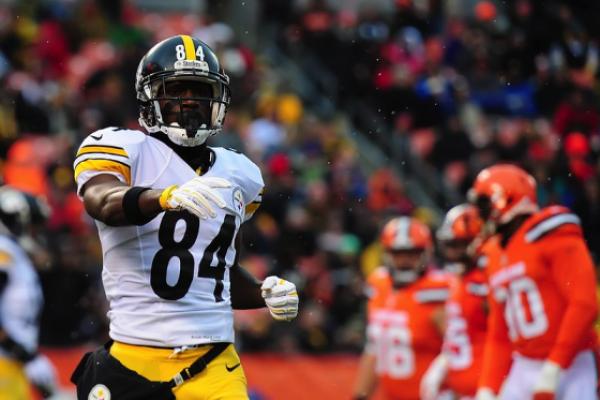 Antonio Brown, a former Central Michigan Chippewa, has made many headlines since he joined the NFL in 2010. As a rookie, Brown established himself as a premier punt returner and later as one of the best wide receivers in the NFL.
For a long time, wide receivers have gotten the reputation of being divas, from Terrell Owens to Chad Johnson. But, Brown took the title of diva to the next level.

Here are the top 10 crazy moments from Antonio Brown’s career, both on the field and off.

In 2018, Brown made the pro-bowl, which is the NFL’s version of an all-star game. Brown rented a mansion in Orlando, Florida, and equipped the mansion with luxury chef Stefano Tedeschi. When the festivities ended, Brown refused to pay the $40,000 tab that he ran up with the chef.

Out of all of Brown’s mishaps, this one had the potential to be the most catastrophic. In 2018, a man and his grandchild were almost struck by furniture falling from the sky. When police arrived at the building, they found an incensed Brown on the 14th floor.

He admitted to throwing an ottoman, vases and more from his apartment and subsequently faced civil lawsuits from both the grandfather and Brown’s former landlord.

The first on-the-field incident to make the list comes from 2014 when Antonio Brown kicked a Denver Broncos punter in the face. Brown returned the punt and outran most of the Broncos’ punt team. With just the punter to beat, Brown apparently attempted to hurdle punter Spencer Lanning and ended up kicking him in the face, knocking the punter over. It’s unclear if Brown was really trying to jump over Lanning, or if the kick was intentional.

In 2017, Brown made an insane touchdown catch against the Tennessee Titans, in which he pinned the ball against his own helmet with one hand in the end zone. Among a long highlight tape of Brown’s remarkable plays, this catch stands out for just how ridiculous it appeared. Watch the catch here.

It’s not uncommon for athletes to grow unhappy with their teams and request to be released or traded. What is rare, is for an athlete to go to the public via social media with such a request, as opposed to letting his agent handle it behind the scenes. Brown posted a message on Instagram in 2019 that said “Release Me”. And yes, he even tagged the Oakland Raiders (the team he was with at the time).

Brown has upset a long list of people from former landlords, coaches and chefs. But you can add former doctors to that list, as Brown farted in the face of Pittsburgh doctor Victor Prisk. Prisk described the event as “childish.” Oh, and in case you were wondering, Brown never paid the bill from Dr. Prisk’s office either.

Cryotherapy, where patients expose themselves to extremely cold conditions, has become increasingly popular among health enthusiasts and athletes. Typically, patients go into a cryotherapy chamber with wool socks and booties to protect their feet. Brown went into the therapy without any covering or protection for his feet, and as a result, got frostbite that prohibited Brown from being able to practice or participate in team activities during the 2019 off-season.

The most recent event to make this list, Brown was seen Monday night sitting courtside at the Nets-Grizzlies game. While sitting courtside isn’t in itself ‘crazy’, it is notable that Brown was in the public eye just one day after leaving the Buccaneers in dramatic fashion (which we will get to later in this list.)

In 2019, the NFL announced new helmet requirements, mandating that helmets worn by players could not be more than 10 years old. Brown refused to switch helmets to one that complied to NFL standards, creating a huge rift between himself and his team at the time (the Oakland Raiders). Ultimately, the disagreement led to Brown leaving the Raiders without ever playing a game for the team.

1. Brown’s Sideline Meltdown Against The Jets

Coming in at number one on the list (maybe due to recency bias) is Sunday’s sideline meltdown in New Jersey. While playing against the Jets, Brown grew increasingly unhappy during the game and ended up taking off not only his shoulder pads and jersey, but his undershirt as well and ran across the end zone shirtless. On his way out, Brown waved his arms, pumping up the crowd. After the game, Buccaneers’ coach Bruce Arians stated that Brown is ‘no longer a Buc.’

Antonio Brown has a meltdown at the hand of the #Jets and #BraxtonBerrios pic.twitter.com/RGhSYpyrOu

As a football fan, I hope to see Antonio Brown back on the field, as he is one of the best wide receivers I’ve ever seen play the game. As a human, I hope Brown finds the help that he needs and is able to grow and move beyond his past actions.

European Central Bank hikes rates, vows ‘we are not done’